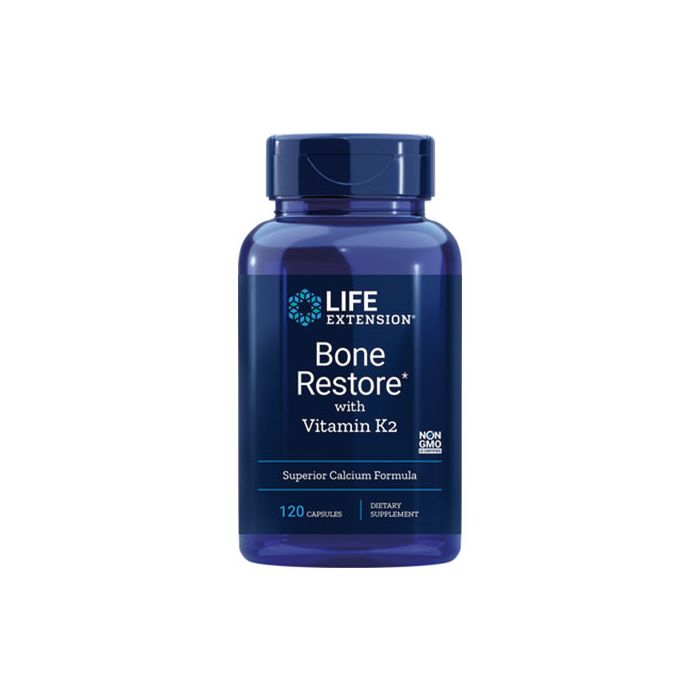 Skip to the beginning of the images gallery
Details
Throughout life, cells known as osteoblasts construct bone matrix and fill it with calcium. At the same time, osteoclasts work just as busily to tear down and resorb bone. This fine balance is regulated by many factors, including systemic hormones and cytokines. Bone mass reaches its peak by the middle of the third decade of life and plateaus for about ten years, during which time bone turnover is constant, with bone formation approximately equaling bone resorption.

As our bodies age, this fine balance is lost. As the relative hormone levels shift in midlife — more drastically in women than in men — the osteoclasts gain the upper hand and bone mass begins to dwindle. Some bone is already being lost by the time women reach menopause, but the rate of loss can increase up to tenfold during the first five years after menopause.

Bone density loss is not just associated with calcium deficiency, but also with an insufficient intake of a host of other nutrients including magnesium and vitamin D3. In order for calcium to help maintain healthy bones, adequate amounts of vitamin D3, zinc, magnesium, manganese, and other nutrients should be available so that calcium and phosphorus can be incorporated into the bone matrix. Additionally, many forms of calcium are not particularly well absorbed.

While loss of bone mineral density is more commonly experienced by women, aging men can also have this issue. Both men and women may experience significant deficits of magnesium if they do not supplement. Bone Restore now contains 300 mg of magnesium. Magnesium is not only needed to maintain strong bones, but it is critical to promoting a healthy vascular system. In fact, magnesium is critical for facilitating hundreds of enzymatic reactions that our bodies require to maintain optimal health.

In fact, the boron in this formula, called FruiteX B® OsteoBoron®, is a calcium/carbohydrate/boron complex, similar to what is found in fruits and vegetables and is more bioavailable than boron citrate. Scientific research has established the beneficial effects of boron on the strength of bones and joints.

One reason why aging people experience bone mineral density loss even though they are taking calcium supplements is that they may not be absorbing enough elemental calcium. Bone Restore provides calcium in capsule form to ensure that it breaks down fully in the digestive tract.

Calcium and other minerals are best not taken with fiber, because fiber can interfere with their absorption. There is evidence that calcium from supplements and dairy foods may inhibit iron absorption, although it has been very difficult to distinguish between the effects of calcium on iron absorption versus other inhibitory factors, such as phytate. Although current understanding of this suggests that the inhibition of calcium on absorption of iron is of short duration and the body has adaptive mechanisms.

Calcium supplements are best taken with meals. They should always be taken with a full glass of water, juice, or other liquid to enhance solubility. If calcium-containing formulas are taken only once daily, they may be best taken in the evening.

An abundance of human clinical data reveals that vitamin K plays a critical role in maintaining healthy bone density by facilitating the transport of calcium from the bloodstream into the bone. Poor vitamin K status also results in increased circulating levels of undercarboxylated osteocalcin that is shown to be associated with increased bone loss in postmenopausal women.

Vitamin K2 (menaquinones) is found in meat, eggs, and dairy products and is also made by bacteria in the human gut, which provides a certain amount of the human vitamin K requirement.51 Human studies show that vitamin K2 is up to ten times more bioavailable than K1. Vitamin K2 remains biologically active in the body far longer than K1.

In recent years, two forms of vitamin K2 have been extensively researched and the findings reveal vastly improved effects compared to K. The MK-7 form of K2 remains bioavailable to the human body over a sustained 24-hour period and to higher levels (seven- to eightfold) during prolonged intake.

Use: Take four capsules daily, or as recommended by a healthcare practitioner.
More Information
Reviews
Write Your Own Review
Only registered users can write reviews. Please Sign in or create an account